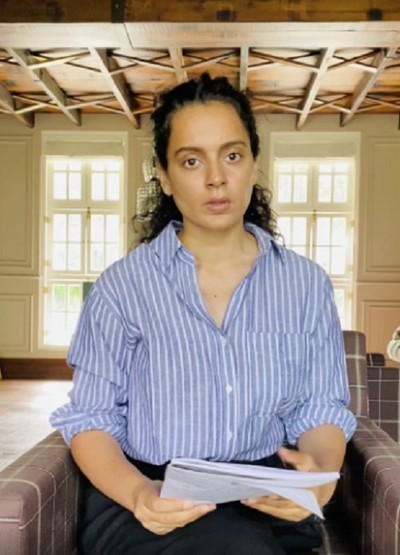 The strong and bold actress Kangana Ranaut is once again taking stand for late Sushant Singh Rajput, who committed suicide on June 14 at his Bandra residence.

The new IGTV of Kangana posted by her Team Kangana captions, ‘Emotional, psychological, and mental lynching on an individual happens openly and we all are all guilty of watching it silently. Is blaming the system enough? Will there ever be change? Are we going to see a monumental shift in the narrative on how outsiders are treated?

In the IGTV, Kangana Ranaut revealed how Sushant Singh Rajput was tortured by media, who are the puppets of Bollywood mafias.

She reveals, how ‘Bollywood Life’ media website on 23 August 2017 wrote that whenever Sushant does s*x he always listens to his songs and he is very big narcissist’.

22 February 2019, ‘Mumbai Mirror’ writes ‘ Sushant did drama in the party and hit a director with a glass bottle’.

Kangana Ranaut continues to reveal, 18, October 2018, ‘DNA’ writes ‘Sushant raped his co-actor and now he will go to jail as per #METOO’

Kangana Ranaut says there are much more fake news about Sushant and these media, who are the puppets of movie mafias call this emotional, psychological and mental lynching as journalism.

Kangana Ranaut also connects her story that media always prints against her but she never spoke up. However when they cursed the freedom fighter (Manikarnika: Jhansi Ki Rani) she confronted the reporter and the same night four senior media reports ganged up and announced to make her film flop and ban it.

Kangana Ranaut reveals about how 3000 journalists ganged up against her to do her emotional lynching publicly and the society and law doesn’t say anything.

When she tried to do case on them, after one month they all vanished after her film was released.

Kangana Ranaut ends up her video questioning the public, that the society always stays silent.

The public reads the news and feels entertained but have you ever thought why these type of news never gets printed about the nepo kids (Star Kids).

Kangana Ranaut says this injustice loop will be one day in your neck and your kids neck and then when people will clap and make fun, then you will realize.

Kangana Ranaut's such big confession has once again hyped the mystery behind Sushant Singh Rajput's death and his suicide.

Follow our page Serialgossip.com for latest updates and latest news.