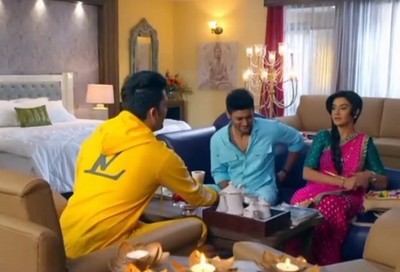 KT moved on in his life after his first wife betrayed him.

Now when KT started to bloom feelings for Preeti, who is his Shaadi Mubarak partner, KT's wife came back in KT's life.

KT and Preeti are going to face a lot of new troubles ahead.

Arjun doesn't reveal his surname and signs KT and Preeti for arranging his mother's remarriage which is going to happen between KT and his wife.

Preeti is already feeling restless with Arjun's name AT and his proposal,

Will KT and Preeti find the woman being KT's wife,

To know more updates, stay tuned with us.

Rupali Ganguly most attached to 3 co-actors on sets of Anupa...

Shaadi Mubarak: Dejected KT tells his past story to Kusum, not Preeti