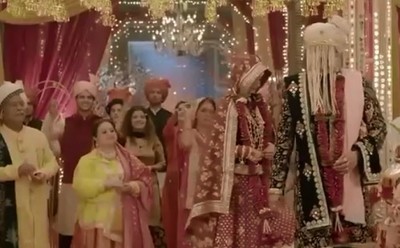 The latest story of Molkki TV serial will see Virendra and Purvi's wedding.

Virendra and Purvi aren't aware of each other's real identity.

When Virendra fills in Purvi's hairline, the duos get shocked to see each other.

Virendra who never wanted to remarry but agreed for Sakshi mill land is determined to not give his wife right to Purvi.

Purvi faces a big shocker when Virendra leaves Purvi behind and enters the palace without her.

Purvi is left all alone to perform her grah-pravesh without Virendra which breaks her in tears.

Purvi agreed for marriage to assure Priyu's marriage before her pregnancy gets exposed to the villagers.

However, Purvi never thought that she will have to face such hate in her marital life.

Purvi will be able to win Virendra's heart,

Stay tuned with us to get the next update.

Molkki: Virendra jumps in water to save Purvi turns lifesaver of Purvi