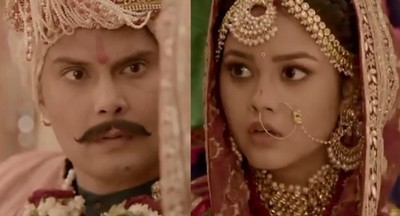 Virendra cracks a deal with Bheem and agrees to remarry in return for naming Sakshi mill land on his name.

Here Purvi also agrees to marry in lieu to save Priyu from shame and get her married before her pregnancy revelation.

The family fixes Virendra and Purvi's marriage but they get to see the different groom and bride photos.

Soon in the wedding mandap, when Virendra turns and fills sindoor in Purvi's hairline,

What shocks both of them is their real identities.

Virendra and Purvi unfortunately tied in an unwanted marriage

Now when Virendra fills sindoor in Purvi's hairline, both get stunned to the hell.

The unfortunate circumstances tied Virendra and Purvi's in an unwanted relationship,

Let's see if Purvi and Virendra could accept each other.

Molkki: Virendra jumps in water to save Purvi turns lifesaver of Purvi