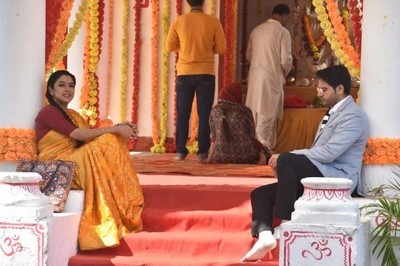 Star Plus's popular show Anupama is about to showcase some shocking twists.

It was earlier seen that Kavya gets fired by Anuj for crossing her lines and insulting his relationship with Anupama.

Vanraj will accuse Anupama of firing Kavya but Anupama will give him a befitting reply.

On the other side, Anupama leaves for work the next morning when Vanraj stops her from going.

Anupama gets into Anuj's car in front of Vanraj leaving him irked.

In the upcoming episode, Anuj and Anupama will go site seeing at Ahemdabad outskirts.

Then we see Anuj and Anupama sitting outside a temple where Anupama will ask Anupama about the reason for him being single till now.

Meanwhile, everyone will get worried at Shah's house for Anupama as it is getting late.

On the other hand, Vanraj worries and says that he is hoping Anupama is fine.