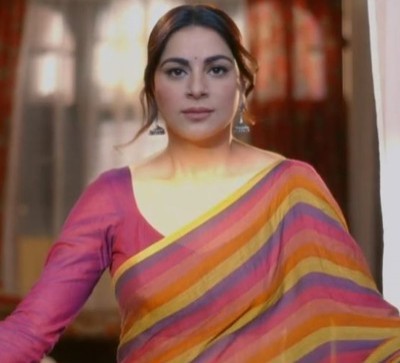 Zee tv's popular show Kundali Bhagya is about to showcase some major drama in the upcoming track.

It was earlier seen that Luthra family conducts pooja at the house where they see a Goddess-like woman walking into the house.

As she walks into the house she steps on kumkum due to which her footprints are all over the floor.

Luthra's looks confused and as she walks inside in the light they all get shocked to see that it's Preeta.

Sherlyn and Prithvi are not able to believe this and the family was not expecting Preeta's return.

On the other side, Sherlyn and Prithvi get threatened by Preeta's return as she could claim the share of the property and also stop Natasha and Karan's marriage.

Meanwhile, Rakhi tells Preeta about how Prithvi handles the business and the house.

Rakhi requests Preeta to forget the bitter past and calls her their lucky charm.