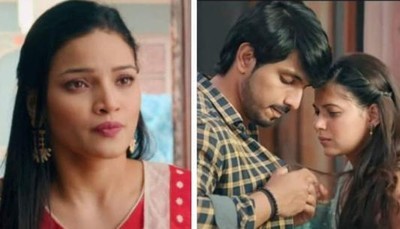 In the serial Star Plus popular serial Pandya Store, Shiva rushed to the operation theatre and heard Doctor and Anita's conversation.

While stopping, Anita from implanting Dhara's child in her womb, the container fell on the ground crashing Dhara's dreams.

Dhara witnessed this fight and realized that Anita was only acting as a friend.

She is left in deep shock, in rage Dhara gave a tight slap on Anita's face and confronted her.

Anita fails to answer Dhara but Shiva locks Anita and decides to teach her lesson where he straight away wants to kill Anita.

Anita tries to run for life Shiva follows her

Anita tries to run for life while Shiva follows her.

At the end Anita has no way to run and gets blocked by the public and Shiva from all sides.

Pandya Store: Not Dhara but Anita is pregnant with Gautam's child

Pandya Store: Not Dhara but Anita is pregnant with Gautam's ...

Pandya Store: Raavi is Sorry all set to confess Love for Shiva

Pandya Store: Raavi is Sorry all set to confess Love for Shi...

Pandya Store: Raavi on the radar for pushing Gautam Dhara in...

Pandya Store: Shiva calls for splitville with Raavi if she hates Dhara

Pandya Store: Shiva calls for splitsville with Raavi if she ...