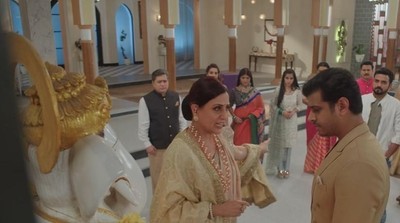 Star Plus's popular show Ghum Hai Kisi Ke Pyar Mein is about to showcase some huge drama in the upcoming track of the show.

Virat and Sayi's life seems to take a new turn in story as they part ways.

Sayi is shattered as she thinks that Virat is the father of Shruti's son.

On the other side, Virat also gets betrayed by his family as no one is ready to trust him except Mansi.

Virat gets thrown out of the house by Ninad and others.

Bhavani takes the command she stops him from leaving the house and orders him to get Sayi back.

However, Virat stands on his decision as everyone is against him and he leaves the house.

Shockingly, Bhavani falls off the stairs and meets with a deadly accident leaving everyone shocked.

Virat and Sayi are separated and now a bad omen hits the Chavan family again.