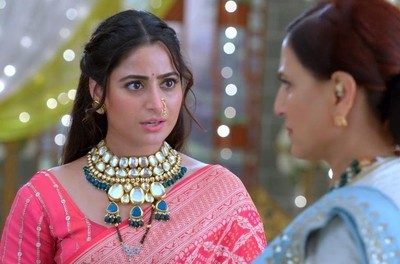 As Sayi does not reach Chavan Nivas on time Bhavani gets irked waiting for her.

On the other hand, Patralekha decides to take the advantage of the situation.

Chavan's gets tensed as Sayi and Virat do not reach home.

Meanwhile, Pakhi brings juice for Bhavani which was supposed to be prepared by Sayi.

Bhavani gets furious at Patralekha and she scolds her as Sayi had prepared the Aam Panna and she had to make it.

Bhavani scolds Patralekha for taking the rituals of the house as a joke.

This leaves Patralekha shocked and she gets upset with Bhavani's reaction.

GHKKPM: Sayi's ragging! gives a befitting reply to the new b...