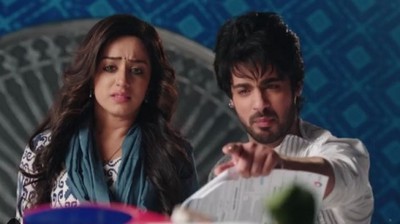 The current episode starts with Prisha seeing a scary nightmare of her death where Saransh is crying holding her dead body requesting her to wake up while the ladies in her funeral taunting him calling Prisha murderer.

Vasu arrives to meet Prisha where they share an emotional hug.

Prisha tells Vasu about her bank FD where she and Appa are nominee while she also asks them to claim the insurance money and collect her PF also.

Vasu pacifies her saying nothing will happen to her but Prisha hugs her and asks her to leave for home.

As soon as she leaves, Rudraksh arrives where Prisha gives a paper to him which has Saransh’s likes, his favorite food things and allergies while she wants him to get everything in his life.

Prisha takes promise from Rudraksh that he will protect Saransh and never let him alone while he also asks him to hold his hand and sleep at night with him.

Prisha gives Saransh full custody to Rudraksh where Rudraksh gives the papers and Prisha signs them. Prisha feels heartbroken while Rudraksh says his revenge and Rajeev’s last wish is fulfilled.

Rudraksh arrives to Prisha’s house for Saransh where Vasu and Gopal scold him.

Gopal and Vasu refuse but Rudraksh is adamant as Prisha has given the legal custody to him and he is his father where Prisha is going to die after three days, Saransh wont’ be an orphan.

Gopal and Vasu are still against it but Saransh comes saying he will go with his new Papa where his mumma will also come.

Rudraksh threatens them to pack Saransh’s bag or he will call Police.

Gopal and Vasu reluctantly pack their grandson’s bag while they remind him to take good care while Saransh takes promise from them that they will not cry after he leaves.

While Rudraksh leaves with Saransh, Gopal also leaves for some important work, Vasu is left behind shattered.

Prisha cries thinking about Saransh and apologizes to him.

Rudraksh announces Saransh’s stay in Khurana house that everyone is shocked.

Saransh thanks Rudraksh and hugs him that Rudraksh recall of Rajeev’s hug.

Saransh sleeps with Rudraksh while here Prisha is taken to get hanged.