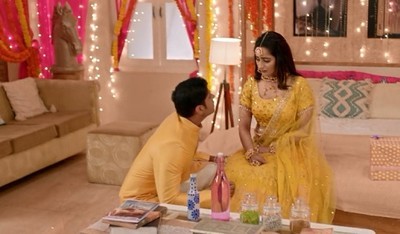 The current episode starts with Samrat’s haldi ceremony when Virat gives surprising dance performance on the song ‘Badtameez Dil’. Virat imagines dance with Pakhi when they romantically get closer.

Here Jagtap’s mother forcefully gets haldi applied to Sayi when she along with her son Jagtap enjoys torturing Sayi.

Sunny mistakenly reveals about Virat already chosen girl for him that Aayi gets pissed off. The families have a moment when everyone starts teasing Virat except Aayi.

Devyani interrupts Haldi function and applies haldi from Samrat’s haldi bowl. Aayi gets angry for the apshagun but Virat handles the situation.

Kamal with his police force reaches Vittal’s house when Vittal and Kamal have a major showdown. Kamal starts investigation in the house but he along with his officers fail to find Sayi.

Virat, Sunny with their siblings reaches to Pakhi’s house for haldi.

Pakhi and Virat come face to face when they get completely shocked by seeing each other.

Pakhi and Virat both get teary eyes when Pakhi rushes back to her home while Sunny compels Virat to meet Pakhi.

Virat and Pakhi meet on an emotional note where Pakhi reminds Virat of how he played a game with her.

Pakhi reminds Virat how she gave her number to him and reminds Virat of the call that she made but unfortunately he didn’t recognize her.

Virat questions Pakhi’s love who forgot him within 7 days and decides to take 7 wedding rounds.

Pakhi tells how he didn’t contact her and that’s why she gave her yes to Samrat’s marriage proposal.

Virat reveals everything to Pakhi about what happened to the number she wrote in his hand, how his phone broke and how he called her so many times but she blocked his number.

Virat is heartbroken in tears and confesses about the text message he sent to her.

Pakhi is shocked by reading the text message where Virat invited her to his brother’s wedding to get her meet his family and talk about their alliance.

Virat and Pakhi have a major breakdown. Pakhi is shattered realizing how she misunderstood Virat every time.

Pakhi requests her parents to accept her and Virat’s relation as she loves him a lot.

Pakhi’s father agrees to her happiness but he wants Virat to take his final decision.

Pakhi looks at Virat with hope while Virat stands upset.