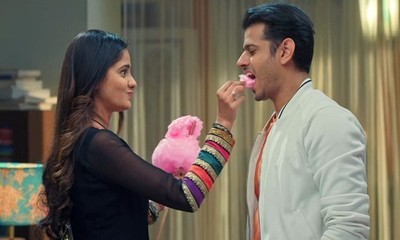 The current episode starts with Virat talks to Sayi and gets shocked seeing the wounds on Sayi's wrist.

Sayi reminds him that she is leaving the Chavan mansion when Virat gets teary eyes.

Virat accepts his mistakes and requests Sayi to not leave the house.

Virat tells Sayi about how much she is important to him and thus he can't let her leave.

Sayi is stubborn while Virat requests her and apologizes to her.

Mohit and Karishma fight when Usha brings sAYI'S food plate but Karishma snatches and eats it.

Mohit gets angry at Karishma.

Virat tells Sayi about how he planned to take her on lunch and tells about how much he was concerned about her because he didn't know her professor.

Virat cries bitterly when he tells Sayi that he didn't do lunch and Ashwini too didn't give him lunch.

Virat cries and asks Sayi to accept him as his family member.

Virat and Sayi both cry when Virat holds Sayi's hand and requests Sayi to give him one chance.

Sayi asks Virat to never punish someone like what he did with her.

Sayi asks Virat to never starve anyone, Virat keeps his hand on Sayi's head and promises to never hurt anyone.

Virat and Sayi finally patch up when Sayi asks Virat for food as she is super hungry.

Virat sneaks back into the room and recalling their day out, he promises Sayi to soon bring her food.

Virat brings candy floss and food for Sayi while Sayi is sleeping.

Virat feeds candy floss to Sayi and smiles seeing her.

Sayi eats candy floss and feeds the same to Virat while they have a romantic and happy time.

Pulkit meets Sayi in the temple when finally Pulkit reveals that Devyani is his wife.

Pulkit promises Sayi that today he will come to meet his wife.

Virat is coming towards Pulkit and Sayi.