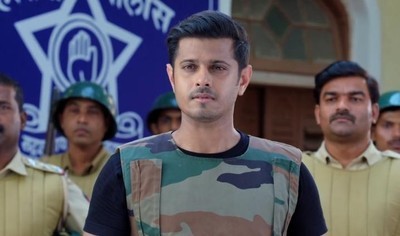 Pulkit wants Sayi to see love in Virat's heart and eyes where Sayi refuses to have any love feelings for Virat.

Further Pulkit tries his best when Sayi informs Pulkit that Virat loves someone else and he has cleared the same before marriage.

Pulkit feels his efforts are gone futile when he asks Sayi to rethink on her decision.

Post Pulkit makes his leave Sayi imagines Virat in some other boy who brings a bouquet.

Harini comes home and is shocked to see Devyani whom Pulkit and Madhuri introduce as her mother.

On the other side Pakhi questions Virat is he will informs them about his whereabouts as she is worried.

Bhavani supports Pakhi and reminds about Samrat missing on mission.

Devyani tries to love Harini while Harini push her

Ashwini asks the duo to speak good about Virat.

Virat decides to inform Ashwini about the same if network is there in that area.

Virat and his team mates are ready for the mission and decides to make call to their family seek blessings.

Devyani tries to love Harini while Harini push her.

Sayi gets message about Virat being in dangerous mission.