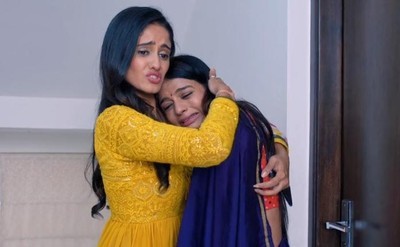 The latest episode of Ghum Hai Kisi Ke Pyaar Mein begins with Harini and Devi's fights where Harini tags Devi bad woman and not her mumma.

Harini wants mumma like Madhuri and goes to her home.

Devyani gets a panic attack where Pulkit fails to control her and calls Sayi home.

Sayi agrees to come home for the sake Devyani and on reaching there she gets call from Virat.

Sayi disconnects the call on seeing Pulkit and goes in.

Devyani is happy to see Sayi and spend good time with her.

Virat calls Sayi once again when Devyai answers the call.

Virat thanks Sayi for answering the call when Devyani makes fool of him and laughs.

Sayi disconnects the call when Virat asks Devyani to pass the call to Sayi.

Pulkit informs Sayi about Virat being in a dangerous mission

Post this Devyani takes Sayi to show her house where she comes to know of Harini and Devyani's bitter terms.

Pulkit informs Sayi about Virat being in a dangerous mission.

Sayi cries and eats food stating she does not care for Virat and his Chavhan family.

Pulkit can see the love and miss in Sayi's eyes clearly.