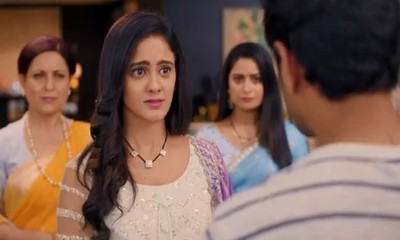 The current episode starts with Sayi confronts Pakhi and Bhavani who blame her for instigating Devyani against them.

Sayi takes a strong stand for herself revealing Devyani is sensible enough to see Pakhi’s truth while she also reveals about when she came in house, Devyani warned her to keep eye on Pakhi as she always sticks with Virat.

Sayi confronts Virat for not accepting the truth and leaves for the college.

Pakhi confronts the entire family for not saying a word to Sayi when she insulted her so badly.

Virat gets call from his authority who praises Sayi for his recovery.

Virat is ready to join his duty soon while here Karishma enjoys the drama that happened in the family.

Mohit stops Karishma from saying a word against Sayi while Karishma as usual enjoys the live entertainments that happen every day.

Pulkit insists Sayi come home with him and cheer up her mood meeting Harini and Devyani. Sayi leaves with him.

Sonali is quite concerned for Sayi telling Omkar that for the first time she found Sayi right, and Pakhi wrong.

Virat and Sayi miss each other

Sonali can understand her pain and is quite shocked knowing Pakhi and Virat’s past relationship.

Omkar doesn’t believe in Sayi but Sonali believes in her because Pakhi and Virat silently listened to everything and didn’t utter a word.

Bhavani and Ninad join them when Bhavani as usual curses Sayi.

Sonali praises Karishma when Karishma comes and tells about Pakhi didn’t eat anything.

Bhavani is super worried for her when Ashwini laughs questioning how they treat the two Bahus differently going caring towards Pakhi, neglecting Sayi.

Bhavani brings Pakhi to Virat’s bedroom and tells about how she didn’t eat anything.

Virat is concerned for Sayi and gets worried when finds that she didn’t return from college.

Sunny brings Vada Pav for Virat when he misses Sayi.

Sunny tells Virat that Sayi is in love with him when Pakhi overhears them.