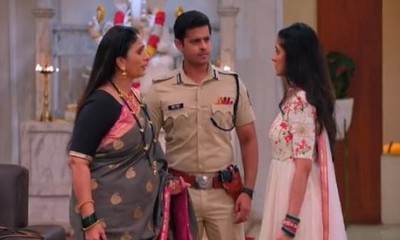 The current episode starts with the Family hell-like worried for Sayi as she didn’t arrive home while Pkahi tries to calm down Bhavani.

Sonali asks for her friends when Mohit reveals that he already contacted the college and there are no extra classes while the students already left at 5 PM.

Pakhi and Sonali try to fuel Virat’s brain questioning if she went somewhere with her special friend Ajinkya.

Sayi’s phone is switched off when he finally reveals that she took 50,000 rupees and is afraid if anyone robbed her.

Sonali manipulates the situation when Virat gets frustrated and bursts out in anger.

Pakhi stops Virat from talking in such a way.

The family drama continues when Bhavani panics because of the money Sayi took.

Virat gets angry and decides to find her when suddenly Sayi marks her entry.

Virat stops her and tries to enquire her when Sayi calms him and says that she will tell only after coming inside.

Bhavani, Sonali, Ninad all take Sayi on radar and start questioning her.

Shockingly Pakhi tells about how students get into bad habits of taking drugs and get addicted to it.

Shivani stops Pakhi’s nonsense but she continues with her accusations.

Sayi calls two men with a box and makes Ninad open it.