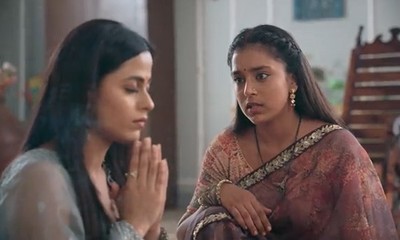 The current episode starts with Aryan shouting for Jyoti when Imlie reveals how she tried to attack her and Madhav.

Aryan and Imlie are shocked to see Harry and Jyoti doing the pooja in their room.

Imlie tries to prove her point but Aryan misunderstands her.

Harry leaves when Imlie grabs Jyoti’s mouth and threatens her saying now she shouldn’t even dare to look into her eyes or she will burn in Imlie’s fire.

Imlie challenges herself to now expose her before Aryan and everyone because earlier she was Imlie from Pagdandiya, Aryan Singh Rathore’s wife but now she is also Cheeku’s Amma (Mother) and she will not spare her (Jyoti) for what she did.

Jyoti is shocked while Imlie leaves. Aryan confronts Imlie for doubting Jyoti who is busy praying for them from day one she came to their house.

Imlie gives her final words to Aryan that she will get evidence against Jyot, if not today then maybe tomorrow but she will get it for sure.

Therefore, she asks him to do only one thing and that is to think once about why Madhav is in the hospital when he is such a big criminal.

Imlie leaves and talks to her child and showers her love on him while praying to Seeta Maiyya to protect her and help her.

Neela is recalling whose shoes Kairi wore and swears to not spare the person after she has beaten her such badly.

Aryan to find the truth

Neela again sees Kairi in the kitchen with the same shoes. She thus decides to expose this man and so she calls out everyone in the family.

Just then Sundar comes, which shocks Arpita as she wonders about who is under the blanket.

Imlie aka Kairi unveils the blanket and stuns Neela. Arpita and Sundar smirk at each other when Imlie tells an emotional fake story to Neela about why she wore her father’s shoes.

Gudiya cries for Kairi’s father when Kairi fools Neela with her drama.

Neela is still irked when Jyoti brings prasad for Aryan. She tries provoking him against Imlie but the latter says the opposite to her.

Aryan talks about maybe he only misunderstood Madhav this shocks Jyoti as she realizes how her plan is failing.

She thinks of not letting Aryan meet Madhav.

Imlie: Paralyzed Imlie hopes Aryan to save her

Imlie: Paralyzed Imlie hopes Aryan to save her Star Plus se...

Imlie: OHH NO! Jyoti’s dire attempt to kill Imlie In ...

Imlie: Imlie to swap new plan against Jyoti In the popular ...