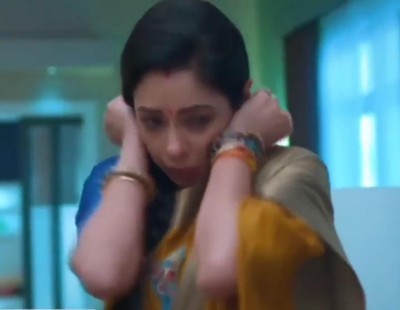 The episode starts with Kinjal lashing out Rakhi for hiding the truth from her. She says that she wanted her to be like Anupama in the house.

Baa says that if she wants to be with Anupama then she can call her there. Kinjal questions her in what right she's calling Anupama when she never treated her as the daughter of the house. Kavya agrees with her and taunts Baa. Baa makes it clear that she should not go to Anupama's house.

Adik is about to say something to Barkha which Pakhi told him. Anupama is with Anuj when Vanraj comes there with the baby, Kinjal and Kavya.

Samar tries making Toshu understand but Toshu is not ready to listen. He gets even more panicked when he learns that Kinjal went to Anupama's house.

Vanraj brings baby to Anupama and hands it over to her. He apologizes for troubling her so does Kinjal.

Anuj says the day didn't come when a daughter has to take permission to visit her mother. Vanraj asks Anupama to take care of Kinjal and the baby and gets emotional seeing baby.

Anuj comforts Vanraj and says that every thing will be alright. Barkha gets irked over Kinjal staying there.

Toshu fears that Anupama would convince Kinjal also to get get divorce from him just like she did with herself. He's scared to lose Kinjal and the baby and says that he wants to commit suicide.

Vanraj finds it difficult to leave hearing baby car. In car Kavya wishes that Kinjal and Baby comes back home as soon as possible and assures her best to raise the baby herself.

Kinjal apologizes Anupama for being a trouble for her but Anupama asks her not to say so. Kinjal asks Anupama to go ahead with her work as she just needs her presence around.

Toshu keeps calling Kinjal but she cuts the call. Anupama comes to Anuj to apologize for the burden again but Anuj says he loves this side of her the most.

He supports her and agrees to take care of Kinjal. Barkha comes to Kinjal and indirectly hurts get with her words.

Anupama struggles with her responsibilities

Kinjal will shout that the baby had choking and Anupama will hear it when she was in video call with Anuj. Anuj by mistake falls down and hits his head.

Anupama will reach home and will go mad upon wondering whom to aid first.