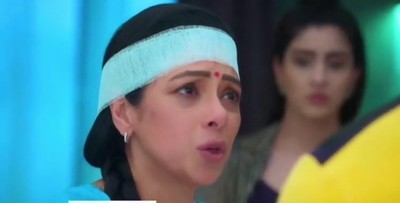 The episode starts with Anupama entering Dimpy's room and cries seeing her condition. She keeps hand on her head while Dimpy breaks down in tears.

Anupama consoles her while Dimpy says that till yesterday she never regretted being a girl but today she does. She asks Why's she girl but Anupama asks her to question why those cheap people were men.

Anupama apologizes Dimpy for not able to protect her. Dimpy says that it's not her fault.

Anupama and Anuj assures to be with her. Dimpy requests her to call the Police as she wants to fight and gets the culprits punished immediately.

Anupama appreciates her boldness and calls her lioness. She feels proud of Dimpy's boldness.

Kavya consoles Baa who's crying for Pakhi. She says she's not stone hearted but also knows Pakhi would not let them live in peace.

Anupama sees Nirmit not ready to file a complaint. He says that they don't want to fight as they may do those again to them.

Kavya takes the toast box from Vanraj and doesn't let him meet Pakhi. Anupama encourages Nirmit to not back off from complaining against the culprits.

She says that Dimpy is showing courage and is ready to fight for justice and encourages him to stand by her side. Kavya sees Pakhi bossing around Adhik.

Only Adhik invites her in and leaves to attend a call. Kavya gives the toast to Pakhi who just eats it without ounce of shame.

She taunts Kavya for lecturing her like mother and asks her to get out. Kavya says that she's not Anupama who would hesitate to slap if she goes out of the line and leaves.

Dimpy gives her statement to Police while Everyone gets teary. They all appreciates her courage to again live the terror and explain whatever happened.

They say that they are proud of her. Anupama notices Nirmit looking down when Dimpy expresses her trust on him to stay by her side.

Nirmit will want to leave Dimpy fearing the society. Anuj and Anupama will try to stop him but in vain.

Dimpy will ask them to let him go. She will throw the phone jewels on his face and says that the mangalsutrs was very valuable to her.

She will say that he made it no value and breaks the mangalsutra.