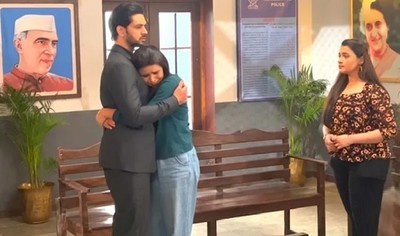 In the upcoming interesting track of Zee TV serial Kundali Bhagya, now you will see Anjali playing her dirty politics against Karan and Preeta.

Earlier it was seen how she seduces Rishabh and tries her best to get intimate with him.

Unfortunately, this puts Rishabh into a tight spot when Anjali accuses him of molesting her.

Here everything deteriorates and Rishabh also has no clue to prove his innocence.

Thus, this reveals the hell-like villainous side of Anjali which is now going to affect Karan badly.

The next in the story you will now see Anjali playing her dirty politics to stand Karan against Rishabh and Preeta.

Now, when she hugs Karan and manipulates him proving how Rishabh tried to molest her,

So, let's see what happens next in the show and how Karan reacts to this.

Make sure to read serialgossip.com for new updates to know what happens next.