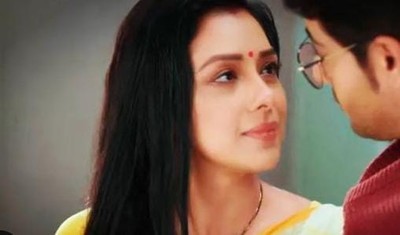 Episode begins with Anupama helping Leela in the kitchen and then she asks her about Pakhi not leaving Shah House.

Leela tells her to mind her own business and handle her own house instead of poking her nose in Pakhi's matter.

Anupama hears Pakhi and Adhik's argument. Adhik scolds Pakhi for asking Leela to wash his clothes and for giving Bapuji his shirt to iron it.

Pakhi gives reasons as to why she did that.

She wants to purchase dishwasher but Adhik asks why she can't wash the utensils?

Pakhi states she doesnt want to become like Anupama. Adhik says Pakhi is gaining weight due to less physical work.

Pakhi tells him not to body shame her. Anupama tries to make Pakhi understand but in vain.

Leela supports Pakhi and Anupama stops Leela from doing the wrong thing. Leela tells her to focus on Dimple.

Anupama thinks now she has no choice but finding the other way to teach Pakhi a lesson.

Anuj scolds Adhika for neglecting his work and he can't afford loss in business because of him.

Adhik feels his personal life issues is affecting his business.

Anupama clams Anuj down but the latter regrets for not giving much priorities to his office work earlier.

Anupama thinks she will keep away Anuj from family issues from now on.

Leela scolds Samar for trying to mingle with Dimple and the latter defends her.

Anu and Dimple start making arrangements for the Christmas.

Anupama tries to adore Anuj but the latter scolds another employee. He is upset as he lost one of the important projects.

Precap - Anupama tells Anuj about her argument with Pakhi.

Anuj says he won't get involved in family matters of Anupama.