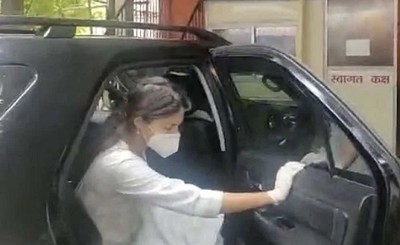 Rhea Chakraborty was asked to show all the text messages exchanged between the two where her entire phone was scanned along with her and Sushant’s pictures and videos.

Rhea revealed that she was living with Sushant Singh Rajput at is Carter Road penthouse which Sushant rented along with his friend, Siddharth Pitani.

Rhea also revealed that they were planning to buy a property and were also planning to get married at the end of the year 2020.

However the Police raised questions when Rhea revealed about their breakup and fight the few days ago before Sushant’s death. Rhea showed the text messages and calls exchanged between and Sushant.

Sushant Singh Rajput also called Rhea Chakraborty on Saturday night, the few hours ago before he gave up on his life.

Sushant also called Mahesh Shetty first who didn’t answer and then he called Rhea. After sleeping when he woke up and saw Mahesh’s call, he called him back but was not connected.

After the Police investigation which lasted for 9 hours, Rhea Chakraborty was asked about Sushant’s clinical depression as Rhea was the only person who was with him almost all the time.

Rhea not only spoken about it but also showed some proofs that prove he was undergoing treatment for clinical depression.

Sushant also turned towards meditation and yoga to maintain his well-being while some days he would feel extremely low and upset.

However Rhea revealed that she tried to coax him to take medications but to no avail.

Rhea revealed that she had a major argument with Sushant about his flat mate and friend Siddharth Pitani and expressed her displeasure at Sushant for allowing his friend to stay  in the house while she also suggested to ask him to vacate the flat.

Rhea also confessed that after she left the house, she informed his sister and asked her to come and stay with him.

Rhea Chakraborty also revealed about how they both were finalized for Rumi Jaffrey’s next movie project but the lockdown postponed the plan.

Rhea Chakraborty made many revelations in her 9 hours of Police investigation,

Let’s see how soon the truth will unfold as to what made Sushant Singh Rajput give up on his life and commit suicide.