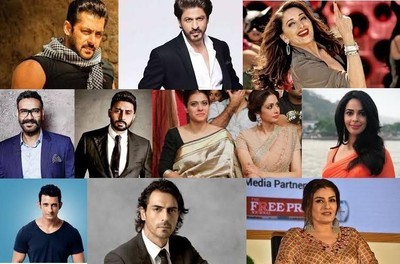 Bollywood actors try their luck on small screen due to less work or no work in Bollywood industry.

Here are 20 television unusual shows, unusual because we hardly remember few of them.

Few of the show had a good run but few were just pulled out due to low TRP.

Mentioned below are the list of mixed show where few we remember and few we have not even seen.

10 Ka Dum hosted by Salman Khan for three seasons managed to win viewership and TRP too but did not work for longer time.

Kahin Na Kahin Koi Hai hosted by Madhuri Dixit where the concept of the show was match-making. But this show was too flop one.

Malini Iyer where Sridevi was the lead in this comedy oriented serial produced by husband Boney Kapoor.

Unfortunately they failed to impress the loyal audience and this one too was a flop.

Kya Masti Kya Dhoon was a popular dance show hosted by Sonali Bendre but due to low TRP the show went off air.

Karishma – The Miracles of Destiny

Karishma – The Miracles of Destiny revolved around her life story and actors like Arbaaz Khan, Sanjay Kapoor were also part of it.

Hasna Mat show by Kader Khan was flop but he did many more hit comedy shows.

Lift Kara De show was hosted by Karan Johar where he managed to call many celebs but the show failed.

Hrithik Roshan who used to judge this show Just Dance did not manage to work well on Television.

Preity Zinta tried her luck with this new show Guinness Book Of World Record which failed to garner any good record in Television.

Television shows which failed to impress auidence and garner TRP

Deal Ya No Deal

National Bingo Night based on American game show hosted by Abhishek Bachchan turned out to be flop show where he failed to impress the loyal viewers.

Rock-N-Roll Family was a dance competition which was hosted by Ajay Devgan, Kajol and Tanuja. There were many family participation was seen but eventually it was pulled out.

Manoj Bajpayee hosted this crime based show Kam Ya Zyada where contestants were able to win prize money.

Mallika Sherawat once used to judge this show but later due to her unwanted tantrums she was thrown out of the show.

Urmila Matondkar used to host this singing reality show where family used to battle to win the show, but hard luck for the same.

Chak De Bachche was a dance show where Raveen Tandon was the judge but due to low rating it did not work.

Sharman Joshi’s quiz show left the viewers confused and it got pulled out.

Arjun Rampal came out with unique show where he organised a face off amid celeb and the fans who used to hate them.

India’s Magic Star was hosted by Jackie Shroff which later got pulled out.