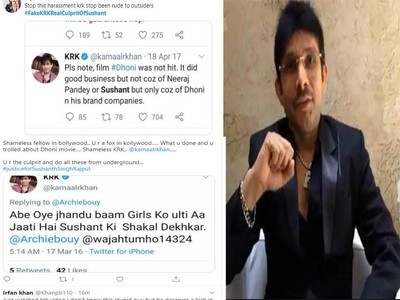 As things are getting out of hands and netizens are demanding the justice for Sushant Singh Rajput.

Where further Kaam R Khan also tweeted that ,” bollywood never helps anyone, this is the place where you have to deal with all your problems while dealing with other issues.

Amid all this Netizens also dig out the old videos where KRK was humiliating Sushant and also said that Dhoni got popularity because its brand not because of Sushant Singh Rajput, it all make Sushant broken.

Everyone over internet is saying that KRK is real culprit of SSR as he is also puppet of Karan Johar and other companies.