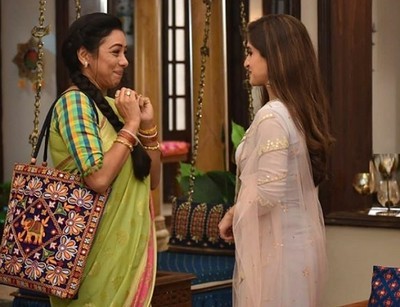 The current episode starts  with Anupama’s mother regretting and blaming herself for getting Anupama married soon after her dad’s death.

Because her brother was not independent so she got her married when a good alliance came.

Anupama refuses saying no and says it is her mistake that she though she will manage her job and house together.

Anupama tells Bhavesh about how Vanraj’s guests came and she got late for school because she had to cook food for the guests.

Bhavesh tells Anupama that Vanraj doesn’t want her to progress .

Vanraj here tells Kavya that he wants to see her progressing because his personal life depends on her while Kavya denies.

Kavya is upset that to persuade her, Vanraj says I Love You to Kavya while Kavya smiles.

Vanraj apologizes and asks for Kavya’s forgiveness while Kavya accepts him and they have a time together.

Vanraj then tells Kavya that Paritosh wants her to come home when Kinjal’s parents will visit them.

Here Samar is worried for Anupama and thinks why she didn’t came yet.

Paritosh and Samar argue when Baa says Anupama likes to roam while Paritosh taunts now they will have to do all the work while Samar reminds Paritosh that Anupama is not a servant.

Samar asks Paritosh to respect Anupama while Vanraj comes and yells at Samar for behaving himself.

Bhavesh questions Anupama if her job is nothing while Anupama takes Vanraj side saying it’s not his mistake but she failed to manage.

Bhavesh reminds Anupama that she not allowed to manage and she can become Devi in Sasural and you become a human in Maayka.

Anupama regrets saying she failed to keep Vanraj happy and sees the time. Anupama realizes she is late for home , she quickly removes the ghungroos and asks Bhavesh to call Samar.

Samar asks Anupama to come home as Kinjal and her parents are coming.

Anupama is surprised and agrees to come while here Vanraj and the family is already having a get together with Kinjal and her family.

Vanraj betrays Anupama and hides about Kinjal's family visit from Anupama while he gets Kavya instead of her.

Kinjal’s mother likes the house while Vanraj again acts like a value person and says his friends often ask him to shift but he never leaves as how he can leave this house as it’s his dad hard-earned house.

Kinjal’s dad Pramod praises Vanraj’s good values while Anupama is on the way to home.

Kavya compliments Kinjal while Kinjal’s mother asks her to call the servants to do the work.

Vanraj is about to introduce Kavya that Paritosh interrupts in saying Aunty was asking something.

Kavya tells she has done B.com and MBA where she along with Vanraj work together and she is the group head.

Kinjal’s mother is impressed while she praises Kavya.

Kinjal’s mother hopes Kavya will not have problem with Kinjals’ work while Vanraj says of course not.

Kinjal’s mother talks about fixing the engagement and then only Anupama arrives in shocking Paritosh, Vanraj and Kavya.

Anupama is happy realizing Kinjal is so beautiful and Paritosh Kinjal look hi-fi.

Paritosh is pissed off thinking how Anupama came so soon while Anupama praises Kinjals’ mother.

Samar takes Anupama and Kinjals’ photo to send the same to Babuji while Anupama apologizes getting emotional and takes Kinjal’s Nazar. Vanraj commands Anupama to get food for everyone while Pramod asks for caffe latte. Kavya thinks to make it but Anupama says she will make the coffee as she knows how to.

Kinjal’s mother asks Anupama as if she speaks Gujarati because they talk in English at home.

Anupama notes, we lose values when we change our language. Pramod agrees with Anupama while Anupama leaves to get snacks.

Anupama comes to kitchen and is stunned seeing everything. Jhilmil tells that Kavya ordered everything while Anupama sees the crockery items.

Jhilmil asks Anupama if she is not upset because she is losing the kitchen which is hers.

Anupama is more upset that Paritosh didn’t tell her about the guests.

Kavya apologizes to Anupama and says that she had to order new crockery because they will be good.

Anupama asks Jhilmil to go to her daughter while she will manage.

Anupama makes coffee thinking her Bahu is pretty and now she will also be have to be tip-top. Anupama thinks to teach cooking to Kinjal while Pakhi comes home and meets the guests.

Baa asks Anupama to get tea for her while after she gets tea for Baa, Vanraj asks her for coffee when she tries to talk to Kinjal.

Samar feels upset and comes to Anupama where he asks about the school inspection.

Paritosh bends down to touch Kinjal’s mother feet to get blessings but she steps back.

Kinjal questions Paritosh he didn’t tell that his mother is not even graduate. Everyone is stunned.

Kinjal tells Paritosh she will not go against her parents.

Later, Paritosh says his marriage with Kinjal will not happen because of Mummy’s education, Anupama stands hurt and shocked.

Anupama: Anupama vs Kavya whom Kinjal to choose as Best Saas

Anupama: Anupama vs Kavya whom Kinjal to choose as Best Saas...