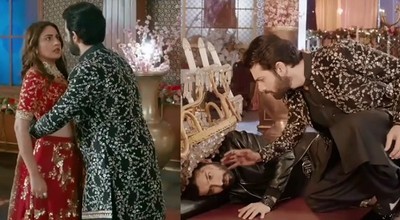 Colors serial Naagin 5 is up for the biggest turning point in the storyline with Veer and Bani’s marriage.

Jai and Bani’s wedding sees a major twist in the show when Veer attacks Jai and kills him dead.

Veer pushes Jai down from the cliff when Bani stands freeze.

Furious Bani finally kills Veer dead taking revenge of her Jai’s death but what will happen next in Naagin season 5 is harder to digest as Veer’s twin brother is here shocking Bani.

Veer and Bani get married

Veer, whom Bani killed is the twin brother of Veer, who is shocked seeing his brother dead.

Bani’s life will now face a drastic storm when Veer steps up to marry her.

Veer has determined to take revenge of his brother’s death and thus he forces Bani to marry him.

Before Bani could accept the reality, Veer forcefully does his and Bani’s Gathbandhan while following the customs and rituals, Veer and Bani will finally be getting married.

Interesting twist and turns are lined up in Naagin 5 with Veer and Bani’s marriage.

Naagin 5: Bani ready with her mastermind game to revenge on Veer

Naagin 5: Bani ready with her mastermind game to revenge on ...