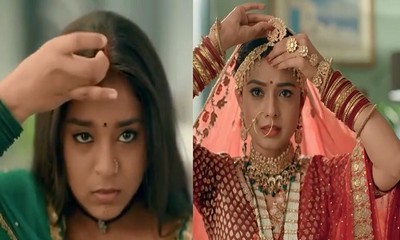 Star Plus TV serial Imlie is all set to witness a major twist in the storyline.

As soon as Malini sends Dev to Imlie's award ceremony, Malini decks up as Aditya's bride and decides to end her life.

Malini feels she is a burden on Aditya and Aditya no more loves her.

Aditya and Imlie who arrives to confess their marriage truth are shocked to see Malini lying in a pool of blood.

The duos face another huge shocker when they come across her letter.

Aditya in a major conundrum

Now, the letter is forcing Aditya to either choose Imlie or stay with Malini.

Aditya and Imlie both are scared because Malini took such a drastic step without knowing the truth so, what will happen if they confess their marriage.

Imlie: Aditya and Imlie arrive to confess the marital truth ...

Imlie: Malini worsens everything for Aditya Imlie The popul...

Imlie: Malini's suicide letter gets Aditya and Imlie at dagg...

Imlie: Shocking Reason behind Malini's suicide The story of...

Imlie: Malini ends her life only to trap Imlie

Imlie: Malini ends her life only to trap Imlie Star Plus pr...