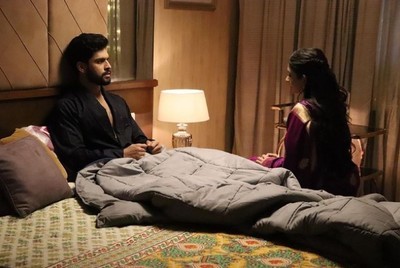 The popular TV series couple Raghav and Pallavi are going to blush in love once again in the upcoming episode of Mehndi Hai Rachne Wali.

Raghav and Pallavi are currently solving each other's life issues.

While Raghav is making efforts to reconcile Pallavi's relations with her family,

Here Pallavi is trying her best to mend Raghav's relations with his Amma and Keerti.

Further, when in the late night, Pallavi wants to talk to Raghav about something important, Pallavi joins Raghav in his bedroom.

The duo's chemistry in the bedroom once again boosts their love bonding but what happens next is quite riveting.

Raghav is deeply overwhelmed realizing how Pallavi is trying to solve his and Amma's issues.

While Pallavi wants to thank Raghav for what all he is doing for her,

This is going to be interestingly amazing to watch how soon Raghav will propose Pallavi and Pallavi will accept his love.

Stay tuned with us to know what new twist is coming in Raghav and Pallavi's love story.