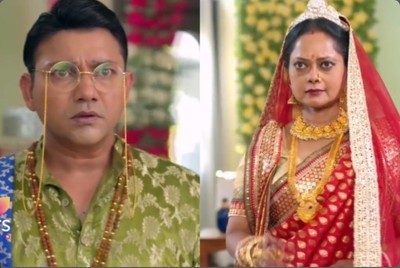 Barrister Babu is Indian tv drama which telecasted on Colors Tv, where its upcoming track of the show will bring much drama.

It was seen that Thaku Maa is much furious with Anirudh and Bondita’s mingling and refused to give Bondita responsibility to Anirudh.

Amid all this makers of the show planned shocking twist ahead where Thaku maa dressed in bridal attire and puts deal forth Anirudh.

Thaku Maa revealed her relation with Trilochan forth Anirudh

Probably this promise would be Thaku Maa’s forever relation bond with Trilochan which gives major shock to Bondita and Anirudh.

And what about Trilochan deal with Thaku maa?

It would be interesting to see how Anirudh will tackle all these problems.

Barrister Babu: Anirudh on mission to safeguard Bondita from...