GHKKPM: Pakhi crosses the nasty line to use Ajinkya against Sairat (Upcoming Twist) 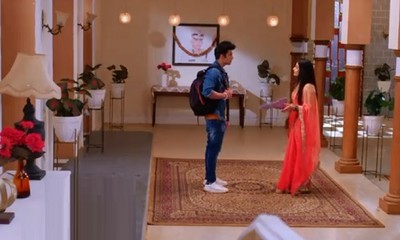 In the upcoming twist in Star Plus serial Ghum Hai Kisi Ke Pyaar Mein, a lot is about to happen in Virat and Sayi’s budding love relationship because Pakhi isn’t ready to let them come closer.

Pakhi shockingly makes Ajinkya her pawn against Virat and Sayi and this is going to literally ruin Sairat’s relationship.

When Ajinkya brings notes for Sayi, Pakhi intentionally urges him to give the papers to Sayi in her bedroom only.

This much isn’t enough that Pakhi next tells Virat that she is taking snacks and tea for Ajinkya in Sayi’s bedroom.

Virat goes angry like a bear and bursts out in anger questioning who gave permission to Ajinkya to enter the bedroom.

And this unfolds the start of the suicide track.

Unfortunately, just when Ajinkya tries to make Sayi drink the water because she choked up,

Virat comes and misunderstands the situation.

Virat wrecks hell on Ajinkya as he badly misjudges Sayi and Ajinkya’s closeness.

How Sayi will defend herself and how Virat will misunderstand Sayi is what we don’t want you to miss.