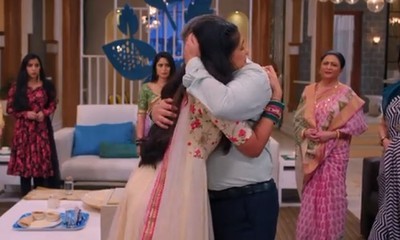 Today's episode starts with Bhavani and Pakhi blames Sayi and put nasty allegations on her.

Virat then confronts Sayi and enquires her about the money she took and why she came home late.

Sayi then asks the men to bring the box. While everyone gets confused, Sayi grabs Ninad’s hand and pulls him to open the box.

Pakhi yells at Sayi for misbehaving with Ninad when Sayi continues pulling Ninad.

Finally, when Ninad opens the box, he gets surprisingly shocked.

Sayi tells the family members about how he purchased the harmonium with her music professor.

While Shivani pulls a taunt on Pakhi, Ashwini, Virat, and Mansi get emotional and happy.

Sayi tells about how Aaba used to get angry at her whenever she gets late but when she tells the truth, he used to quickly hug her and pamper her.

He then hugs Sayi and gets emotional giving a major shock to everyone to the core.

Sayi and Ninad cry as Ninad confesses to her that yet now he never accepted her as his daughter- or daughter-in-law but still she did so much for him.

Ninad gets overwhelmed and thanks Sayi when he again hugs her and thanks to her for the unexpected gift and for fulfilling her dream.

Later on, Ninad happily plays harmonium in his bedroom when Ashwini praises him.

Ninad is so happy and overwhelmed getting this unexpected gift from Sayi that he couldn't utter a word.

Virat comes and gets happy seeing Ninad while he apologizes for never bringing a gift for him.

Ninad blesses him while Ashwini notes that how much everyone disliked Sayi but she only gave love, Ninad agrees with it.

Pakhi urges Ajinkya to give papers to Sayi in her bedroom.

Later she tells Virat that Ajinkya is in Sayi's bedroom.