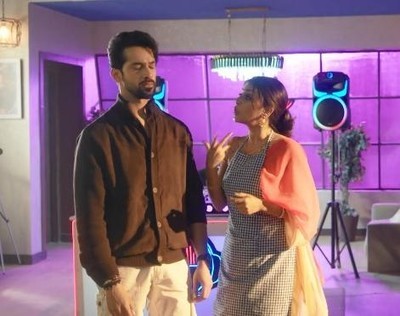 Imlie: Imlie tries to make Atharv understand the need of the hour

Star Plus daily drama Imlie will showcase interesting twist and turn in the upcoming episode.

It seems Imlie welcomes the guest of the house very well as she respects one and all even though they treat her as a servant.

Atharv is unaware about the same and is shocked to know that the foreign guests are treating Imlie as a servant and insulting her too.

However Imlie tries to make Atharva understand that it does not matter for her unless the family is benefitting with the same.

Atharv fails to control his emotions and Imlie's insult

Unfortunately at the end Imlie takes stand for the lady and tries to show the real Akad to the man when he pushes Imlie away.

This time Atharva loses his emotions where he takes stand for his wife Imlie and reveals her real identity.

The guests are shocked to know that Imlie is in real Atharva's wife and not servant.

Will they beg for an apology over the insult before Imlie?

Let's wait and watch for the next twist in the new episode.