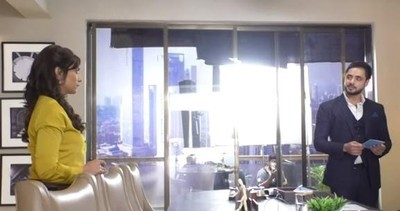 It seems Kathaa was ready to leave the organization when Viaan keeps his words of reality with regard to women and makes changes in the norms for women who can take care of their families.

Everyone appreciates women and Kathaa also smiles seeing a sea change in Viaan.

All this while Kathaa thought Viaan wrong but now she knows that Viaan was indeed much guilty.

Kathaa realise that Viaan has learned a lot from his mistake and he was really guilty.

Hence Kathaa returns back to work and decides to continue her work with EarthCon.

Kathaa too develops a soft corner as here on Viaan does not run behind Kathaa and just keeps work connection with her with all due respect leaves Kathaa impressed.

It would be highly interesting to see what happens next in the life of Kathaa and Viaan.

Kathaa Ankahee: Suspicious dig on how Kathaa arranged One Cr...