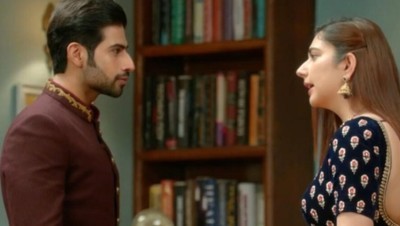 ​Sony TV's most liked show Bade Achhe Lagte Hai2 is up with an exciting drama.

​As seen, Priya and Ram handle the media quite impressively and are free of their accusations.

​However,  as soon as they are out of this problem,  a new one pops up.

​Further,  she also reveals that Ram is trying his best to expel Neeraj from his job.

Now this leaves Neeraj fuming and he goes on revenge mode.

​Further ahead, Priya takes the blame of annulment leakage on herself by saying that she had consulted a lawyer about it.

​However, she is caught in trouble as Nandini asks for the lawyer's number.

​He will safeguard Priya by saying he has the lawyer's number, not Priya.

​However, later he will blackmail Priya to get back his job else he would reveal the lawyer's truth to Ram.

​Now let us see how will Priya get out of this trap.

​Stay tuned for further updates on the show.