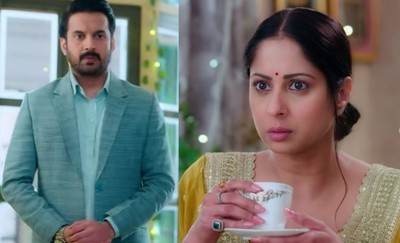 Colors' tv popular show Swaran Ghar is about to showcase some interesting drama in the upcoming track of the show.

As seen so far, Swaran is disturbed when Ajit is referred to as her husband by Ginni's teacher and she scolds Ginni for hiding the truth.

Further, the alcohol starts to take effect, and Ajit forces Swaran to dance with him which leaves Swaran furious.

Now in the upcoming track, Ajit expresses his feelings to Ajit.

Ajit confesses that she is everything to him while soon it turns out to be his dream.

Ajit then gets scared to face Swaran and he tries to hide as she looks out for him.

Now in the upcoming track, Swaran asks Ajit to return to his home to prevent further complications between them.

Will Ajit listen to Swaran's request? What will happen next?