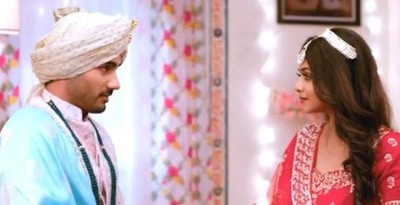 Parineeti: Rajeev calls off his wedding with Neeti reveals the truth

Colors tv's popular show Parineeti is all set to grab the viewer's attention with its spicy and dramatic storyline in the upcoming episodes.

It was earlier seen that Parineet arrives for Neeti's wedding unaware of the fact that her friend is going to marry her husband.

When Parineet goes into the groom's room, she finds his friends consuming alcohol and scolds them.

Rajeev, who is in the washroom hears Parineet's voice and becomes anxious.

Now in the upcoming track, Rajeev learns that Neeti and Pari are best friends which turns out to be the biggest shock of his life.

Rajeev feels guilty about his decision of marrying Neeti as he sees Parineet standing in front of him.

Rajeev out of guilt decides to stop the wedding revealing the truth.

Rajeev begs in front of Neeti's mother saying that he cannot marry Neeti.

Parineeti: High Octane! Parineet vows to get Sanju and Neeti...

Parineeti: Rajeev takes up the responsibility of two wives ...