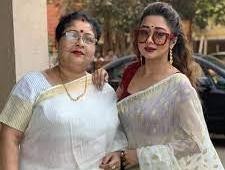 An incident happened in the show where on medical appeal Sumbul Toqueer Khan’s father got a chance to speak to Sumbul.

Where he broke the BB rules and gave Sumbul house information.

He spoke demeaning against Tina and Shalin and even abused Datta on national television.

This vile behaviour and the fact that Sumbul’s father got a second opportunity to talk to her has upset the audience as well as Tina’s mother.

Tina’s mom got emotional and teary seeing her daughter being abused and demeaned on national television.

Since she didn’t get an opportunity to go and express her views on TV, she has released a video on Tina’s social media, appealing to the audience if it was right for someone to abuse and demean her daughter on a national platform?

A crying mother went on to ask if giving such an advice of showing someone their ‘aukat’ is a parent’s duty?