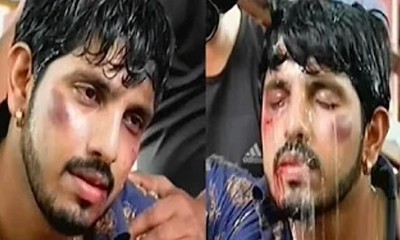 In the next dramatic episode of Star Plus serial Pandya Store, now you will see Shiva crossing the line and hurting himself to hate Raavi more.

Gautam vents out his incensed anger on him for doubting and questioning Raavi's character when she purely loved him all the time.

Therefore, Shiva, who misunderstood Raavi badly, assumes that everyone hates him because he has told the truth.

Thus, furious he now takes up a deadly fight with a deadly fighter in the fighting competition only to punish himself and attempt to die if he can.

Moving on, here he gets badly injured amid the fight but still doesn't let his hate for Raavi go away.

Shiva to find out truth

Shiva comes home all injured with bruises and blood stains.

Wherein Shweta here acts all caring towards him, let's see how soon Shiva finds out the truth and realizes his sin.

Pandya Store: Dhara-Rishita to chase down Nitin with master plan

Pandya Store: Dhara-Rishita to chase down Nitin with master ...

Pandya Store: Shweta uses Shiva and Krish to safeguard herself

Pandya Store: Gautam & Dev chase down Nitin but with twist

Pandya Store: Gautam & Dev chase down Nitin but with twi...

Pandya Store: Dhara shocked to learn about Nitin and Shweta ...