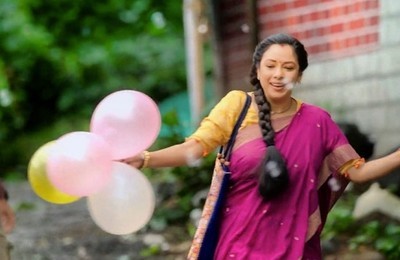 The current episode starts with Anupama and Samar serious talk where Anupama reveals her sadness over how Paritosh hide his and Kinjal’s love relationship from her.

Samar is also sad while Anupama gets teary eyes.

Anupama then asks Samar if he is also hiding his girlfriend from her.

Samar starts singing song while telling Anupama that when he will fall in love, when the bell of love will ring in his heart then he will first tell her that he is in love.

Anupama laughs with Samar while Anupama is excited to meet Kinjal.

Anupama asks Samar about Kinjal where Samar reveals that Kinjal is the daughter of Paritosh’s coaching owner, who are also having their branches in all over India and abroad.

Anupama is not interested in Kinjal’s family but she wants to meet Kinjal and love her like a daughter.

Anupama is excited to become mother-in-law.

Next morning, Anupama gets protein shake for Vanraj and Paritosh who are working out together.

Paritosh apologizes to Anupama while Vanraj tells Anupama that he will talk to Kinjal’s father to meet the families and fix Paritosh Kinjal’s marriage.

Anupama is excited and goes thinking now she is a teacher so Paritosh will be proud to introduce her to Kinjal and her family.

Here Paritosh tells Vanraj that he doesn't want Kinjal's family to meet Anupama because they are high class educated family and will not accept Anupama.

Vanraj reminds Paritosh that Anupama is his mother while Paritosh is stubborn to not let Anupama meet Kinjal’s family because he can’t lose her.

Paritosh wants Vanraj to get Kavya instead of Anupama while Vanraj gets furious and says that he can’t involve Kavya in their family matter.

Paritosh arguments with Vanraj while Vanraj refuses. Paritosh gets angry telling Vanraj he doesn't loves him, he only loves Samar and Pakhi.

Vanraj gets in a dilemma.

Anupama and her new challenge

Anupama gets call from Principal who asks her to come school as there is inspection.

Anupama is troubled and agrees to her while soon Sanjay and Meenu come.

Anupama is now getting more confused as how she will manage the family chores and the school.

Sanjay comes and agrees to help her. Sanjay wants Anupama to take him as her younger brother while he promises that he will take off and manage Meenu.

Leela is against Anupama but Samar and Jhilmil agree to do chores while Sanjay is taking Pakhi to park.

The family is ready to manage everything while Leela too agrees with them.

Vanraj argues with Kavya as she is going with Dholakia for a meeting and he doesn't want her to go with the man, whose intentions are not good.

Kavya reminds Vanraj how he also attends meetings with female employees but he never questioned him, Kavya lashes out at Vanraj.

Vanraj then gets a call that he has to meet foreign clients.

Vanraj reaches home when Anupama is about to get ready for school.

Vanraj asks Anupama to leave her job while Anupama decides to manage Vanraj's task and inspection at any cost.