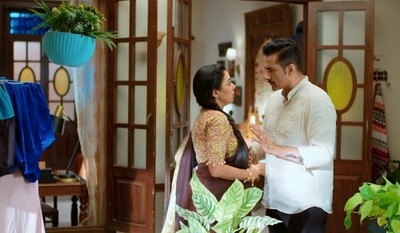 The current episode starts with Paritosh and Kavya’s major confrontation where Kavya makes him realize that there is no love between Anupama and Vanraj where Vanraj finds his happiness in her (Kavya).

Kavya invites Paritosh in her wedding when later she gets Vanraj’s call.

Vanraj is shaken to the core knowing Paritosh found everything while he warns Kavya for her carelessness.

Vanraj sits with Anupama and everyone for a family photo when Sanjay tells Vanraj about Toshu learned his truth. Sanjay reminds Vanraj that one day the truth will be exposed to everyone.

Devika spends lovely time with Anupama when she is excited for her wedding and plans to decorate her room for the wedding night. Anupama blushes and they have happy time together.

Paritosh confronts Vanraj when he questions his father about his and Kavya’s affair when Vanraj thinks even if Paritosh knows the truth, he still can’t do anything as he is his father.

Vanraj plays an emotional drama and lies to Paritosh that he had an affair with Kavya after his arranged marriage with Anupama.

Vanraj reminds Paritosh about how he managed his relation with Anupama in a forced manner because they are not compatible and he found that happiness in Kavya.

Vanraj manipulates the reality making Paritosh believe that he had break-up with Kavya.

Paritosh bursts in anger when Vanraj says Kavya is fighting with her divorce and she needs a suppor system and this is why he had to support her.

Vanraj confesses his true love for Anupama and how his family is his priority but Kavya is insecure and is not ready to understand him.

Vanraj puts all blame on Kavya and proves himself innocent.

Paritosh accepts Vanraj and Kavya’s truth and promises to stay quiet because in his eyes, Vanraj loves his mother Anupama and is bring forced by Kavya.

Paritosh hugs Vanraj when Vanraj joins hands before Paritosh asking for an apology.

They have an emotional moment where Vanraj thinks about how he lied to Toshu.

Anupama falls and ends up breaking tea cup when Paritosh helps her to stand while Vanraj thinks he will have to do more to handle the situation.

Vanraj and Kavya have a sweet conversation on call when Kavya is excited to become his wife and compels him to reach half hour before their wedding.

Leela asks Vanraj to not leave the house tomorrow as it is his marriage.

Vanraj and Anupama have a face-off when Vanraj lies to Anupama about his important meeting in office and wants her to hide the same from the family and he will return by 9 AM.

Anupama gets upset while Vanraj manipulates her.

Finally Anupama agrees when Vanraj hugs her thinking she is very sweet and innocent while he smirks.

Kavya reaches temple for her wedding when here Vanraj is leaving the home.

Anupama’s saree gets stuck in Vanraj’s watch when she remarks Lord Krishna too don’t want him to go while Vanraj says, no matter where he goes, he will return back to her.