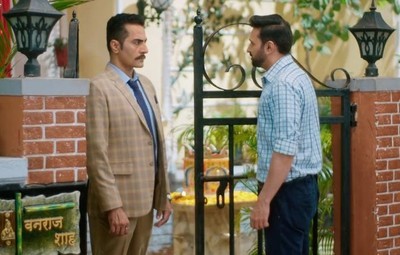 The current episodes of Star Plus serial Anupama begins with Anupama asking Dolly to do her makeover for marriage.

Anupama wants to get beautifully dressed up for Vanraj and wants to perform her remarriage fulfilling all her dreams.

Devika Pakhi and Dolly gets happy to see new side of Anupama.

Later Anupama makes entry with face pack and leaves Vanraj scared where he assumes her to be a ghost.

Vanraj is also shocked to see new side of Anupama.

Next morning Anupama dances as its her marriage day on a love song.

On the other side Kavya gets ready as bride and texts Vanraj sending her picture.

Kavya is over excited and asks Vanraj to reach temple on time.

Further Nandini scolds Kavya to stop her game of fire.

While Kavya is not going to stop and gets ready for the race of victory.

Sanjay warns Vanraj to stop his foolishness and closes his house door.

Vanraj refuses to stop while Sanjay calls Baa and makes sure Vanraj stays inside house.

Kavya is waiting in temple for Vanraj desperately.

Vanraj tries hard to escape and reach Kavya but in vain.

Kavya calls Vanraj again and again but Sanjay has his eyes on Vanraj and does not let him escape.

Vanraj and Anupama are ready for marriage.

Anupama blushes in happiness while Vanraj in tensed.

Vanraj and Anupama come to marriage mandap while Kavya is shattered.