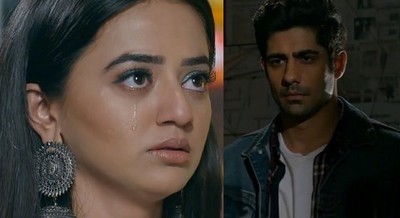 The current episode starts with Ridhima recalls her lovely time she spent with Vansh.

Kabir applies ointment on Ridhima's feet wounds when shocked Ridhima jerks off him.

Angry Kabir lashes out at Ridhima while then he asks Ridhima to compel Dadi to handover Vansh business to him.

Kabir swears to then snatch the business, property and then Vansh's bedroom.

Kabir leaves while Ridhima thinks of the man (Vihaan) who saved and thinks to find him.

Aryan turns to make the deal for which Vansh earlier stopped him.

Aryan thinks now no one can stop him while then Kabir comes. Aryan insults Kabir when angry Kabir beats Aryan and vents out his anger on him for insulting him.

Ridhima meets a man who promises to tell her about the man while he takes money from Ridhima.

Ridhima leaves with the hope that the man will soon call her to tell about Vihaan.

Vihaan snatches the money from the man and yells at him for looting Ridhima and takes her contact number from him.

Vihaan thinks now its time for Ridhima to reach him.

Kabir kidnapped Aryan and exposes the list of his crimes.

Kabir loads his gun and threats Aryan while Aryan gets scared. Kabir threats to kill Aryan in an encounter and close his chapter.

Aryan stops Kabir from doing anything and agrees to do anything for him.

Kabir asks Aryan to call him Kabir Bhai just like he used to call Vansh Bhai.

Kabir puts condition before Aryan to help him in business and keep his mouth shut before the family.

Aryan tells about Ridhima is hurdle while Kabir compels him to not use his brain.

Kabir thinks to use Ridhima to get closer to Dadi.

Ridhima comes home and gets shocked to see Kabir and Aryan working together on the business.

Aryan appreciates Kabir before Ridhima and involved him in business when Ridhima realizes that Kabir must have scared Aryan.

Ishani bursts out her anger on Aryan asking Aryan for how much he sold himself for calling Kabir Bhai.

Dadi apologizes on Ishani's behalf but Ishani vents out his anger on Kabir.

Ridhima thinks to somehow stop Kabir or he will snatch the property, business and everything soon.

Ridhima thinks to take Angre's help as only he can help her.

Angre is beating and punishing himself with belts when Ridhima stops him and scolds him.

Angre regrets after not saving Vansh and failed to protect him.

Ishani blames Ridhima for everything and lashes out at her while Ridhima gets the message and Vihaan's address.

Ishani stops Angre from torturing himself and asks him to instead make plans to oust Kabir.

Ishani gets caring towards Angre while here Vihaan is waiting for Ridhima.

Ridhima finally reaches and enters in Vihaan's residence while here Vihaan is adoring Ridhima's beauty while looking at his picture.

Vihaan comes and stands in front of Ridhima.

Ridhima gets stunned to see Vihaan and calls him Vansh.

Kabir swears to revenge her.

Ishq Mein Marjawan 2: Vihaan has other plans for Ridhima exposes his real identity

Ishq Mein Marjawan 2: Vihaan has other plans for Ridhima exp...

Ishq Mein Marjawan 2: Ridhima's Vansh back as Vihaan to save Ridhima from Kabir's goons

Ishq Mein Marjawan 2: Ridhima's Vansh back as Vihaan to save...