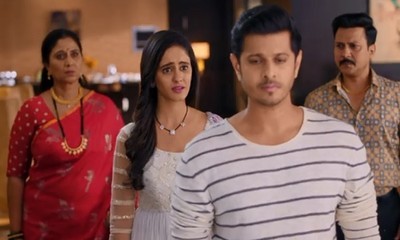 The current episode starts with Ashwini stops Sayi from bringing their marital tension before the family when Sayi pacifies her saying she can understand the pain that she has gone through the years but she (Sayi) can’t keep her pain inside.

Sayi tells how her Aaba taught her to fight for justice if she doesn’t get justice by demanding.

Pakhi insults Sayi and blames her for always creating drama when Virat also tries to stop Sayi but Sayi doesn't.

Bhavani, Ninad, Sonali, and Omkar compel Sayi to shut her mouth but all in vain, Sayi takes a strong stand for herself and questions Virat and Pakhi’s truth.

Virat refuses to answer any question of Sayi when Sayi stops him and compels him to answer her question.

Sayi counts on Virat questioning if he didn’t tell her on their compromising wedding day that she should never expect anything from her because he has given a promise to someone else and that someone is Pakhi.

The family stands shocked while Bhavani bursts at Sayi for putting disgusting blames on Virat and Pakhi.

The family lashes out at Sayi for her fake story while Virat and Pakhi don't accept anything.

Bhavani and Sonali then question even if Virat and Pakhi had something in the past then why she is affected.

Sayi stands silent when Bhavani reminds that she always talks about leaving the house, she never accepted this marriage then why she is blaming Virat and Pakhi.

Sayi questions Bhavani's partiality where she always questions her but now when her son and favourite bahu are questioned, why is she supporting them and not questioning them.

Ashwini and Mohit remind Sayi that they just know Virat and Sayi marital relationship and Pakhi is Samrat's wife.

Ashwini also asks Sayi to forget the past and see the present where she is married to Virat.

Pakhi counts on Sayi for putting the fake blames on her when she knows that no one will believe her.

Bhavani brings Pakhi to Virat and tells him that she didn't eat anything from the morning but Virat is concerned for Sayi.

Sayi is with Pulkit and tells him that Virat will find her if he really cares for her.