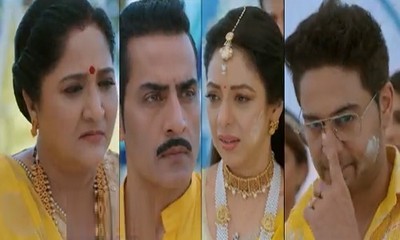 The current episode starts with Anupama and Anuj’s Haldi ceremony when the music plays and the couple starts dancing.

Anupama and Anuj dance together with the families as they apply haldi to each other romantically.

One by one, the family members apply haldi to Anuj while Vanraj is unhappy.

The kids bring spices when Anuj uncovers the plate and overwhelms Anupama as she recalls her past when Vanraj used to lash out at her for her smelling hands.

Finally, Anuj applies haldi to Anupama but when he applies haldi to her feet, she gets more emotional. Ooo Anupama song plays when Anuj one by one takes the spices and rubs them on Anupama’s hand while talking about their future responsibilities.

Anuj wants Anupama to never be in kitchen if any guest comes and if she can work in kitchen then he can also cook in the kitchen.

Baa and Vanraj are not so happy seeing Anuj and Anupama but Anupama is surely enjoying her haldi function with Anuj.

Everyone applies haldi to Anupama except Baa and Vanraj.

Anupama’s mother taunts Baa and Vanraj saying everyone blessed the couple except for few people who didn’t even respected 27 years old relationship.

Anupama: Wedding to happen the next day on Bapuji's demand

Anupama: Wedding to happen the next day on Bapuji's demand ...

Anupama: Paras Kalnawat speaks about a new entry in show and Anupama's wedding twist coming up

Anupama: Paras Kalnawat speaks about a new entry in the show...