Anupama: Kinjal’s art of no to turn Kavya maid in house (Latest News) 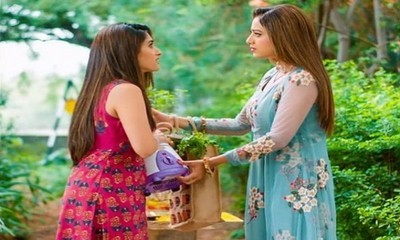 Anupama: Kinjal’s art of no to turn Kavya maid in house

The exciting story of Anupama TV serial is focusing on the new Saas-Bahu drama of Kavya and Kinjal.

Though Kinjal and the family accepted Kavya as Vanraj’s wife, but Kinjal isn’t ready to let Kavya subjugate her.

Further when Kavya tries to snatch the mixer from Kinjal, Kinjal gives a befitting reply to her and compels her to at least look after her standard.

Kavya doesn’t stop but tries snatching it when Rakhi comes and gives an open warning to Kavya to not dare show Saas avatar on her daughter.

Kavya falls flat on her face with Kinjal’s attitude and the story is going to spice up more in the upcoming story when Rakhi sends maid in the house but Kinjal rejects her.

So, Kinjal is not an easy Bahu to deal with but Kavya seems taken her lightly.

Soon when the family starts demanding Kinjal to do their work and Kavya also compels her to do the chores, Kinjal directly says NO.

Kinjal’s art of no to Kavya not only pisses her off but also Kinjal’s no makes Kavya maid in the house as then Baa and Kinjal ask her to do chores just like Anupama.

A  lot more exciting is coming up next.

Anupama: Rakhi on Kinjal being exchanged in hospital disturbingly

Anupama: Rakhi on Kinjal being exchanged in hospital disturb...

Anupama: Advait walk out of show reveal deal with Anupama to Vanraj

Anupama: Advait walk out of show reveal deal with Anupama to...