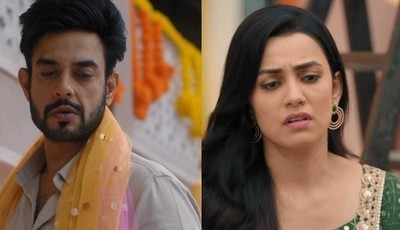 It was earlier seen that Amrita rages in anger seeing Pritam's rude behaviour with his parents.

However Pritam shows his decent attitude when he thrashes down a guy who was shooting vulgarly seeing Angad's sister Sony.

Amrita and Shakuja family thanks Pritam and allows him to be part of baby shower.

When Pritam gets decorating things huge decorative cloth falls on Amrita where she gets entangled.

Pritam starts pulling the cloth slowly and in a loving manner where they share an eye lock moment.

Pritam and Amrita continue with their nokh jhok moment but something is brewing amid the duo.