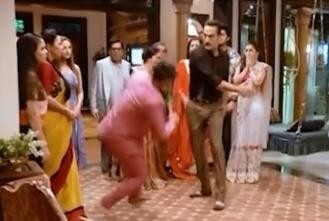 The upcoming episode of Star Plus' popular serial Anupama will showcase an interesting twist and turn.

It was earlier seen that Paritosh comes to attend Pakhi's dance function and cheer her.

Post this function gets over Paritosh has one sole motive where he wants to leave the Shah House and go away with Kinjal.

After Pakhi's drama comes to an end Paritosh begins with his drama.

Paritosh loses his senses and starts pointing finger at Vanraj and Anupama where he wants to pay of the debts for raising him up along with the interest.

Vanraj loses his cool and slaps Paritosh so hard that he falls on the floor.

Kinjal and rest of the family members are shocked with Vanraj's drastic step.