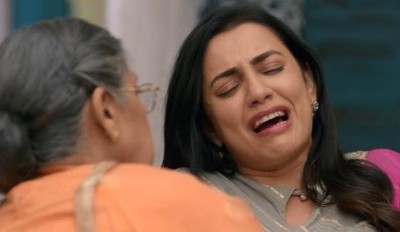 It was earlier seen that Vishakha enters in Pritam's life to ruin him once again.

Vishakha targets Amrita this time which irritates Pritam who goes home all drunk and confronts Amrita.

Pritam removes out his frustration on Amrita who is completely drunk and not in his senses.

Amrita gets scare and gets labour pain where she cries in pain and asks Beeji to help her save her Karan.

Pritam leaves Amrita in pain and walks away.

Pritam wants to save Amrita and her baby life

Pritam turns a bit sober when he comes down and carries Amrita in his arms to rush her to the hospital.

However furious Amrita misunderstands Pritam and slaps him hard.

What will Pritam do now will he be able to reach Amrita to the hospital on time?