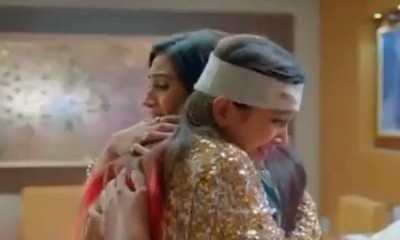 Star Plus TV serial Shaadi Mubarak's latest story will see a surrogacy twist in the story.

KT wants to become a father while Neelima also wants a grandchild.

Preeti finally gets excited to become a mother and conceive KTs child.

Everything falls shattered in Preeti's life the moment she gets her test reports.

Preeti suffers from ovarian cancer and her life is short.

Preeti breaks down when she comes across Purti who recently met KT and Preeti.

Preeti admits Purti who gets injured.

Intriguingly, Purti turns out the daughter of Preeti's friend Pushpa.

Actress Dyanada Ramtirthkar is playing the character role of Purti.

Preeti gets a new hope when Purti decides to help Preeti.

Purti agrees to become a surrogate mother for Preeti and KT's child.

Because Purti needs money to shift in London, Purti is thankful to Preeti for saving her life.

Preeti gets happy with Purti's help but will KT accept the new girl and the surrogacy,

Check out the new updates at SERIALGOSSIP.COM